CAD conversion has always been a key aspect of Okino software development. Our forte is in the conversion (and optional reduction/optimization) of huge & complex 3D CAD file formats to all major non-CAD down-stream file formats and 3D packages. Our converters simply work, work very well, and do not bottleneck on the largest of datasets. The Okino CAD modules cover all the most popular and demanded formats, and have been designed to handle the largest of large assemblies. The CAD modules are always kept entirely up to date.

​
In the personal and hands-on manner we work with each customer, please send a quick email to sales@okino.com explaining your desired source to destination conversion path and we'll give you a proper overview of how to do it properly.

(click on images for 3D converter description, or here and here for the image gallery)

One Space Designer®
to Maya

Okino Computer Graphics can best be understood as two distinct sub-companies: one which specializes in the CAD market, CAD products and CAD users, and one which specializes in the animation/DCC (Design-Content-Creation) markets and users. We excel at providing the industry standard converters for these distinct, yet often overlapping, markets. Okino is particularly well known in the DCC market for the last 20 years as the true pioneer and major provider of data conversion pipelines that tightly connects all key 3D animation packages and DCC file formats. PolyTrans is in use by all major production companies who regularly use 3ds Max, Maya, Cinema-4D, LightWave, Blender, Unity & Unreal Engine, and related common file formats such as Collada, DirectX, DWF-3D, FBX, NGRAIN, OpenFlight, SketchUp, U3D (3D PDF), VRML and many others. 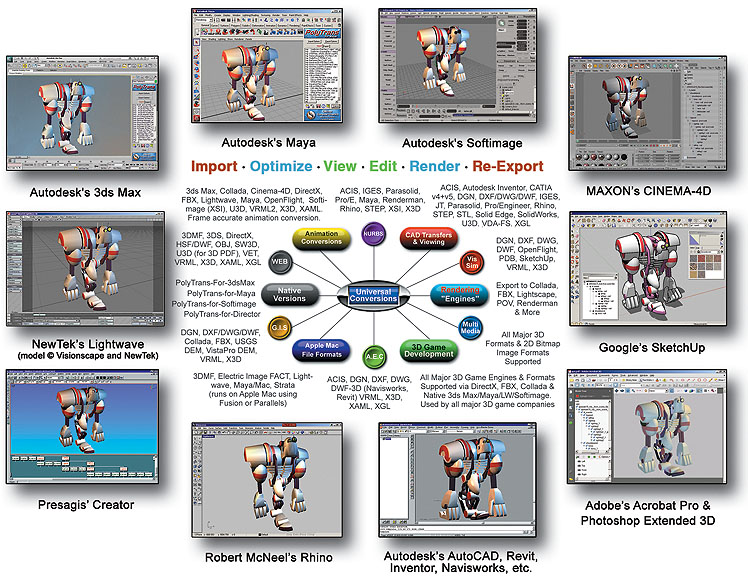 A Summary of All Main Features & Solutions

The basic feature set of PolyTrans, including screen snapshots 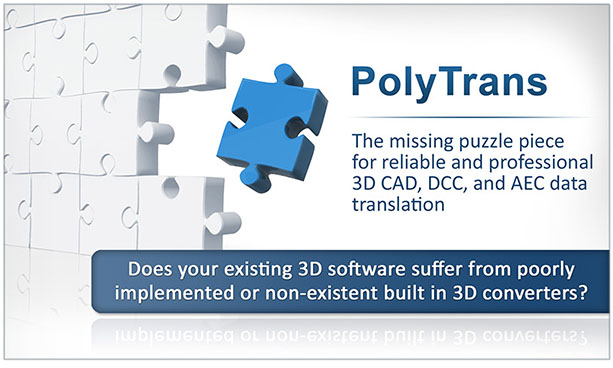 Excellent and complete support for the most popular 3D MCAD/CAD and DCC/Animation file formats, including the most technically accurate and robust bi-directional conversion system between 3ds Max and Maya.

Okino is an engineering R&D company with our first and primary focus on the conversion of huge 3D files. The software is best understood as a "stepping stone", allowing very large source files to be imported then whittled down such that lesser destination programs can import the final optimized dataset. This is one of the most important aspects of Okino software, but little known to uninitiated users. There is no other known similar software on the market that can perform such "stepping stone" conversions, as Okino software is well known for providing.

PolyTrans is our lifeblood. We develop, maintain, (continually) tweak and support it around the clock. Data translation is a very critical business for which Okino's professional production customers demand perfect conversions. The software incorporates hundreds of man years of development and over 3 decades of customer usage, testing and refinement which has made PolyTrans the main conversion system used throughout the 3D software industry. 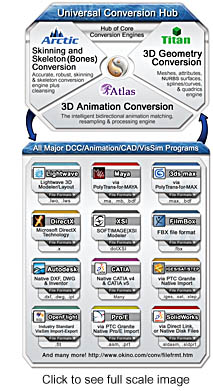 Okino does not use reverse engineered CAD modules as is done by others, but rather licenses, utilizes and/or accesses the industry standard CAD geometry engines from Autodesk, Dassault Systemes (CATIA), PTC (Pro/E & Creo), Solid Edge, SolidWorks, Siemens (JT Open toolkit) and others. This is a little understood and/or easily overlooked aspect of those purchasing conversion software. The next time you look at other programs, ask their developers where they license their reverse engineered CAD modules (most such companies license their conversion technology from France, Russia or India, yet market it as their own).

PolyTrans has the most conversion options bar none. A few examples: 1, 2, 3, 4, 5, 6, 7, 8, 9, 10, 11. These options reflect the depth, complexity and completeness of our converter modules. We spend years to decades writing each converter, not weeks.

Personalized & fast turn around on technical support problems, with customer driven product development. All your questions will be answered almost immediately by our senior developers, or most often our CEO who has 3 decades of 3D graphics experience.

Our customers are often quoted as saying "PolyTrans is an excellent product" and "It really works". Consider the fact that PolyTrans is in use continually around the world by almost all 3d users and companies, and hence the software is extremely well tested and robust.

PolyTrans attacks and overcomes all the hardest translation problems.

Handles all forms of geometry, including NURBS (& trim curves), crack-free handling of BREP solids, meshes with holes plus all attributes, NURBS curves, all varieties of spline curves and polylines. Accessible to OEM volume vendors and plug-in developers.

Developed by some of the most experienced Okino CAD and animation developers where quality, robustness and completeness has set apart our converters from all others. We know data translation intimately, from the very bit-level of each file format up to the top-level politics, and the common day to day usage patterns of most of our customers.

Why So Many Users?

Okino's PolyTrans and NuGraf software have a very extensive, world-wide user base. If you have never heard of Okino, or used our software, then you may ask: what has made Okino software so popular over the years? We feel it comes down to any number of factors:

We personally guarantee the robustness our conversion software. That's simply something you never hear these days. How can we do this? Because our software simply works. Statistics apply to the robustness of Okino software: it is in use by so many people, for so long, that each year the odds of errors occuring in specific modules reduces down to zero. Even if errors are encountered, we will often have them fixed and returned to customers within a day or less on average.

We have a decade head start on all other similar software packages. A decade of end-user testing, refinement and industry usage makes all the difference to robustness and error free software usage.

We have sold our software to so many companies that we have become knowlegable in all of the most common answers and problems dealing with 3D data translation. Our customers can 'tap' our knowledgebase simply by sending a quick email to support@okino.com at any time.

We provide almost 24x7 support for our software direct from the main management team and senior developers, and not from online forums or untrained front-line tech support people. You will always get a very informed answer on your first or second email to Okino.

We typically allocate years to the development, evolution and refinement of each converter until they closely mimic the source/destination animation system. Most of our converters have been in continual development and refinement for decades. Special conversion pipelines such as PolyTrans-for-3dsMax and PolyTrans-for-Maya have had dedicated developers working on them every day for the last 2 decades.

We have always had the most cost effective prices for CAD conversion software, usually 1/2 to 1/10th the going industry average. Even at these lower prices, we provide the best CAD converters available.

We provide free support and a very liberal upgrade/maintenance policy. Most of the software industry provides 30 days free support and upgrades, then expensive maintenaince plans or per-minute phone support -- not at Okino.

We are well known for dealing one-on-one with each and every customer. We don't walk out the door at 5pm. A day does not go by when our customers are surprised to get instant responses from us no matter what time zone they are in. Whether you are in the USA, Germany, Austria, Sweden, Australia or Japan, you'll get real time responses from the same people at Okino (upwards of 16 to 18 hours each day).

At a small incremental price difference, Okino offers the more advanced NuGraf software, from which the PolyTrans software is directly derived. NuGraf contains all of the functionality of PolyTrans in addition to high speed, ray-trace+scanline photo-realistic rendering of huge datasets, the ability to render all of the supported PolyTrans file formats as they would appear in their native programs, interactive texture icon placement, extensive material and 2D/3D texture editing support, a 700 page online manual and a more extensive graphical user interface.  Screen Snapshot